Offer your citizens modern HTML5 video which is viewable on all current devices using one of the most advanced players in the industry.

All of our products utilize Microsoft’s Azure and Amazon’s AWS cloud infrastructure for the highest possible up-time and performance.

Your video archive website can be completely tailored to your city’s needs. Our modern REST API enables easy 3rd-party integration.

How Does it Work?

We will create a beautiful, fully custom, web interface which mimics the look and feel of your city’s website. All of our video archive websites are simple to use, quick loading, and optimized for mobile viewing. We only serve your content via encrypted connections, ensuring your users’ privacy is protected and your video is accessible using the most modern internet browsers, which favor SSL-encrypted connections. Your city’s website will be hosting in Microsoft’s Cloud, Azure, and served using a content distribution network.

Your city will be provided with a PC which will act as a video encoder. The encoder computer will be connected to your city’s video production equipment and, when the encoder is being run, will be the source of your live video stream. The encoder can be equipped with a wide variety of video capture interfaces and will happily accept video from your city’s new high-definition video production equipment or your older, standard-definition, gear. The encoder can either be run constantly or just during meetings.

Live video from the encoder will be sent to our offsite servers for distribution to the public via a content distribution network. While the encoder is being run, a customizable link can be displayed anywhere on the city’s website alerting the public to the fact that live video is being webcast and provide them with a link to our live video interface. The public and city staff will be able to watch the live webcast on any modern device. Webcast viewers will have the option of rewinding the live video several hours to watch or re-watch sections of the live video.

After your meeting has concluded our staff of government video experts will begin the work of getting the video recording posted. First, it will be trimmed to remove any excess content. Next, your video will be run through our propitiatory video transcoding software. The transcoder will optimize the video’s audio levels, re-encode the video to different bit-rates and sizes, and produce other media used by our player such as thumbnail images and downloadable content. Transcoding is an essential step to ensure that your meeting’s video is playable across the widest range of devices and is accessible to the vast majority of your citizenry.

After your meeting’s video has been transcoded, one of our government video experts will begin indexing it by agenda item. In most deployments this involves adding index points to the video based on when items in your agenda occurred and copying corresponding text from your agenda into our video index database. Once indexing is complete the video will be checked for errors and then published to your city’s video archive website for easy viewing by the public and staff.

This process is almost always completed within hours of the meeting’s conclusion, ensuring that your meeting’s video is available the next day when interest is typically highest. 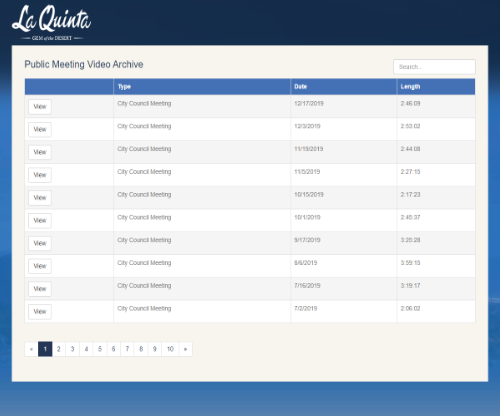